SAVE MORE WITH A FATHERS DAY PROMO GIFT CERTIFICATE!

Blu Tarot/Canna Blu Tarot (Amora Martinez) has teamed up with Strong Soul Massage & Reiki!  Amora Martinez is a skilled oracle/tarot card reader who enjoys spreading wisdom and joy using her loving and judgement free personality! She can help you clarify your life path and find spirituality. She is currently learning to make CBD based products and exploring her intuitive state of being. She is also a cosmetologist, esthetician, and nail tech. Among these studies, she is also a creative artist who loves to create custom pieces.

A Word From Amora:

Hello all!
I am Blu. My Father given name is Amora, Baptismal name Mary, Family Name Martinez.

I am a Native born, City raised Coloradan, who spent most; if not all summers in the San Luis Valley. If anyone asked me where home was, my reply was always "The Valley".
Like many I grew up in a Catholic family religious base, with a combination of spiritual beliefs, Native ancestral beliefs, and "superstitions". I was, and am fortunate to have parents who allowed me to pick my own Spiritual Prat ices, while also teaching me to Respecting other religions, as well other Humans.

Growing up we would have a Medicine man come bless us, as well as our home. After moving to our third home; I was more Familiar with our Culture, and ultimately old enough to grasp it.

Thompson lit the Sage, and Pine in a Large Abalone shell. The smoke began to waft through the air, making its way through our home, and into our lungs and bodies.
Thompson began to speak in Lakota, in words that I couldn't understand, but can only describe; as making my DNA feel as if it was alive and dancing. His words gently whispered out his mouth as he walked through the entire home, clearing the fog that couldn't be seen by the naked eye, and only felt. It was almost as if a veil had been lifted, or blinds opened. You could breathe.

Once the home was Smudged, we lined up.  Elders first, then Parents, lastly young adults and then children. Thompson continued in Lakota, fanning the smoke towards us individually; with a fan made of Real Feathers. Being roughly 13 years old, I was towards the end of the line, if not the last. The feathers slightly touched me as Thompson Smudged me, his words consuming the invisible veil that fogged my soul.

My father was sick, and we looked; to not only western medicine, but the Spiritual medicine that we embodied as well for healing. After being smudged, it was time for us all to gather and eat. Everyone started towards the kitchen, but Thompson pulled me aside, what he told me is what made me who I am today. He said, "Do you know you have healing powers?" Like any kid I was obsessed with Marvel, and I was stoked. Eye's wide in curiosity and confusion, I asked him what he meant. He went on to say "If you place your hand on your father, close your eyes and imagine a Blue light emanating from you to him. It will happen". Thompson placed his hand on my shoulder, smiled and proceeded to follow everyone else to the kitchen.

It had begun with Congestive Heart Failure, leading to a Pacemaker and Difribulator. An estimated two to three years later; spent three or so months in ICU due to a Ruptured Diaphragm. Ultimately Blood Cancer took its toll, but Sepsis took all responsibility. Allison (Al) Martinez lived for 16 years after his first diagnosis in 2002.

I'm not sure if the little girl who would sneak into his room while he slept to share her "Blue Healing Powers", had any effect, but it validated her name for her. Al had always told her, "your name means "she is love", but it wasn't just her name, it was her purpose.

Today I Amora, am a Jack of all trades. I have a deep passion for Art, Music, Cosmetology, Science, History and so much more. I believe that everything has meaning. My goal is to share my story, love, light and healing powers with any and all who are in need. 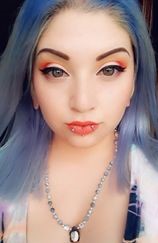 SAVE MORE WITH A FATHERS DAY PROMO GIFT CERTIFICATE!